Faculty at RBHS have a union contract which allows us, the union, to negotiate changes to the terms and conditions of employment. “Collective bargaining” refers to the legal process by which we do this. Unlike a faculty council or university senate, where faculty can recommend Rutgers make certain changes, the union contract is a legally binding document with the University. All appointment letters and university policies are subordinate to it. For this reason, it can be a very powerful tool. 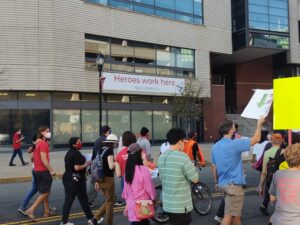 This campaign aims to petition RBHS faculty to merge into the main contract so that both unions can produce a larger single entity with more bargaining power. Simply put, we are stronger together. We wish to bargain as one contract. This will allow us to bring more competitive compensation to all faculty and better solve systemic problems like pay inequity and lack of support. Keep in mind this is about improving pay and other conditions. And make no mistake, your compensation will not go down as a result of any alignment.

While at this time we seek to merge the faculty contracts, we are not merging the unions. If the two organizations were merged, further discussions would need to take place first. After such discussions, any internal reforms would need to go to a vote of the membership.

For the purpose of this contract, all the same procedures will apply to ratification (a.k.a approval of a tentative contract by the membership) This means that members will vote for the tentative deal separately and apart from the legacy Rutgers faculty, just as they do now.

Both the AAUP-BHSNJ and the AAUP-AFT contract have nearly identical language. AAUP-BHSNJ believes that by sitting at one table and approaching the notoriously anti-union Rutgers administration as one faculty, we can make gains to clinical compensation, research compensation, workload, and job security that we simply cannot do alone.

Further, history has shown that AAUP-BHSNJ has often had multi-year negotiations which get dragged out. Rutgers took 6-years to agree to the 2015-2018 agreement. It again took 2.5 years and 64 negotiation sessions before conceding to demands in the 2018-2022 agreement. Part of the reason for this delay was that Rutgers was insisting on 10-15% decreases to faculty pay. While we beat back this draconian measure, such a delay still hurt because raises were postponed, and additional time and legal costs associated with negotiation continued to mount.

The AAUP-AFT on the other hand rarely has had a contract negotiation stretch beyond a year. As such, with a combined negotiation, the AAUP-BHSNJ can bargain with 3500 of our colleagues at our back and championing our proposals.

For purposes of the card campaign, the bargaining unit consists of all non-managerial RBHS faculty (both dues-paying and non-dues paying AAUP-BHSNJ members) who are currently working at Rutgers. This is the universe of faculty covered by the current AAUP-BHSNJ contract. 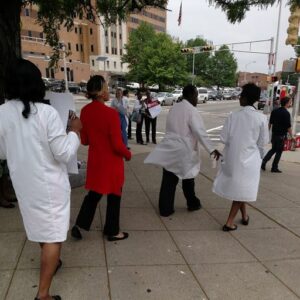 A card campaign is essentially a petition campaign by which those represented by the AAUP-BHSNJ, “the bargaining unit,” can choose to have a single-entity, in this case the AAUP-AFT, to represent them for faculty contract negotiations. Under NJ labor law, if a majority (50% plus 1) of faculty represented sign cards to join another bargaining unit, a state agency called the Public Employment Relations Commission (PERC) will certify the combined unit. Before going to PERC, the unions can ask Rutgers to honor the wishes of its petition signers and simply agree to the merged bargaining units. We must complete the card campaign by the end of September 2022.

No. The petition card on this website is simply to merge the faculty contracts and to bargain as one faculty. You have to sign a different electronic form to become a union member. You can do so here. It is expected that all RBHS faculty eligible to join the union do so. In this way they can support the union’s efforts and not shift the cost to their colleagues who do pay into the union.

There will be no change to your job personally. Our hope is that the combined power of bringing both RBHS and non-RBHS faculty under one contract will win better compensation, increased job protections, and other additional benefits. The combined AAUP-AFT -AAUP-BHSNJ will be much more politically powerful, organized and well-resourced.

No. Whether or not a Dues-Paying faculty member signs the petition card will have no impact on what that member pays for dues. Separately from this petition effort, the AAUP-BHSNJ is looking to move to a percentage-based system in late 2022 which it hopes will be a fairer allocation of dues.

AAUP-BHSNJ is cognizant that RBHS faculty sometimes have clinical or other duties which legacy Rutgers faculty do not. As a result, there may be unique issues related to pay or patient care that are different. Our bargaining committee is not going away. Its representatives on the joint committee will ensure that any terms and conditions of employment for any combined contract also benefit RBHS faculty. Also, dues-paying members still retain their current rights to vote on any tentative deal reached according to our existing bylaws and as a separate vote.

Rutgers has little legal recourse in challenging the will of the faculty. It may choose to do so but that will not delay or obstruct negotiations.